The Legend and the Promise,

the History, Memories, Science, Tradition, and  an Invitation to See For Yourself!

The Legend of the Enduring Cross From the Sea

There was in Mexico a legend that sailors told about the cross of the sea. It so happened that in the first century AD, a bearded man arrived on a small boat to the coast which now-a-days lies at Santa Cruz Huatulco, Mexico. He was carrying an enormous log that resembled the shape of a cross.

The Zapotec and Mixtec Indians watched in amazement as the foreigner raised the log in the middle of their settlement, and they became grateful as he taught them how to live fruitfully. Long after the mysterious man left in the same small boat he had arrived in, people remembered and told the story, until it became a legend. Quetzalcoatl they called him, while Catholic sources called him St. John the Apostle. But it was later, after the port prospered from his teaching, that the Cross of the Sea legend grew wings. In 1587 the pirate Cavendish attacked, looting the town of all its riches. Only the cross remained. He tried to destroy the sacred log in several different ways with no success. The cross was attacked with knives and axes, but it didnt get cut. It was set on fire, but it didnt burn. Finally, it was tied with ropes and chains to Cavendishs ship, in order to pull it down into the ocean, but the ship stopped, unable to move the cross from its mooring! Over the years the cross endured and the legend also.

The Promise of the Sailor from Mazatlan

(Story often told to explain the sudden appearance of the Cross)

Almost 200 years passed. In 1762 a sailor from Mazatl¡n was caught in a terrible storm at sea. As his boat pitched and took on water, he feared that he would never reach his safe inland harbor for the sea became hungry and began to devour the ship. The sailor fell to his knees and prayed to the gods of sailors. He asked Zeus to quiet the thunder and call in the lightning, and he asked Poseidon to let him outrun the storm. But the howling winds drowned his prayers and the sirens of the sea sang to him of death in their arms.

It was then that the sailor remembered the legend of the enduring cross and in desperation , he cried out to the Virgin of Guadalupe who in 1531 promised a special love for Mexicos people.  Oh Mother, My Mother, Queen of the Sea. Ask God to save me, and I will raise a great white cross on high over Mazatlan. One so big and beautiful that people will remember the spark of divinity that lives in the hearts of all. Even those who do not believe will know that Mazatlan worships more than silver, gold and power and that the devil does not rule over this city, my Mazatlan.” And Mary heard him and whispered her request to God who accepted THE PROMISE. The winds sighed.  A sweet breeze came to blow the sailor safely to Mazatlan Harbor while the storm raged behind him. The ocean  bore her gift of giant timbers, washing them gently ashore at the lofty bluff of Cerro de la Cruz.  Then to keep his promise, the sailor worked his trade.  With mallet and chisel, he shaping  the beams into a cross, painted it white, and used the  pulleys and ropes of a sea faring man to set it up on high. It appeared as if by magic for all lost souls at sea, or blowing in the winds of perdition. It stands today upon Cerro de la Cruz to remind us of hope and the power of prayer.

The History of the Cross on the Cerro

Mazatl ¡n was called the Islands by the pirates because fingers of the estuary ran between the high hills so that Cerro de la Cruz was an island towering above a passage of water from Olas Altas to the inland harbor. Historians say that in the year 1806, this land was no more than a wild and solitary forest, all covered with tall trees, lagoons and marshes. The sea washed onto the beach of Machado square and formed an irregular beach to the current Municipal Market. The cross shining white up top the promontory, was the landmark sailors looked for to find their way to the inner harbor. It was also a vantage point from which to look for warships come to capture the port. At first, there was no land passage to Creston and no El Faro ( built in  1879) up top. The cross  of Cerro de la Cruz was the beating heart of Mazatl ¡n.

A Memory of Growing Up Under the Cross

“We were tough little kids that loved to play war 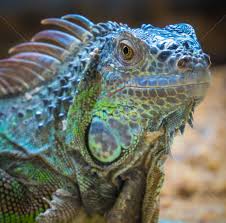 and to do that, in our barrio at the bottom of Cerro de la Cruz we had a gang we called La Padilla. It was not easy to join La Padilla, our gang. We would take little kids who wanted to join and first tie them up and dress them in girly ruffles and make fun of them. Then, we stuffed jalape peppers up their noses and made them slaves. In daytime, we just went out back of my house to play in the rocks. We knew the devil hid out there. We could smell him, especially after a  storm with thunder and lightning.  When we saw an iguana staring out thru the  brimstone, we said the devil was showing his face. It proved you were brave if you dared to go there at night. But if you did, well there was that white cross up high above us in the light of the moon. We all knew that was why it was there, 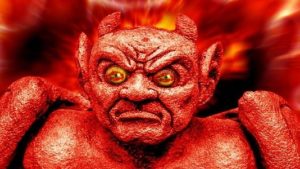 our protection when we were afraid.__Jorge Puente

Being curious, we formed a crew of like-minded adventurers and found our way through various barriers to the top of la Cerro de la Cruz.  Our goal was to determine how the hill was formed and so we asked Mick McCarthy, a geologist to join us. Don Ramon was able to secure the permission to bring us with him. He has been the keeper of  the cross over many years. Plastering, painting, redoing the concrete moorings and steps, all at his own expense.

A lovely young lady biochemist  came along to see the experiments with acid that Mick used to test the stones, and her mother came to translate and to represent the community of faith that would visit the cross on May 3.

Don Ramon is the president of the neighborhood of Cerro de Vigia. He and others of those living so near, have witnessed faint blue light emitting from the rocks on more than one occasion. Mick explained that is indicative of burning sulfur dioxide gas escaping from deep fissures in the lava, most likely along the fault line.  The lady who opened the entrance gate described feeling the earth shudder slightly now and then.  Mick said that animals will exhibit odd behavior before a tremor, like dogs perking up their ears and being a little agitated, or chickens suddenly scurrying around. Horses are perhaps the most sensitive to deep seated movements in the earth that are imperceptive to humans.  He offers details such as rock type and physical description of fault lines to anyone interested, saying that would be his way of adding a grain of sand to the arena of geographical knowledge about Mazatlan. We learned the rocks were colored red by mercury, green by copper, yellow by sulfur, black by lava, etc. The hill was formed like a chimney for molten stone as tectonic plates moved against one another. On close examination, each rock had millions of tiny bubbles that would hold drops of water.  Lightening would be drawn to strike fire and cook the minerals smelling of brimstone. Being a lover of stories, I figured that made it the perfect lair for the devil beneath the hill crowned  by the cross. 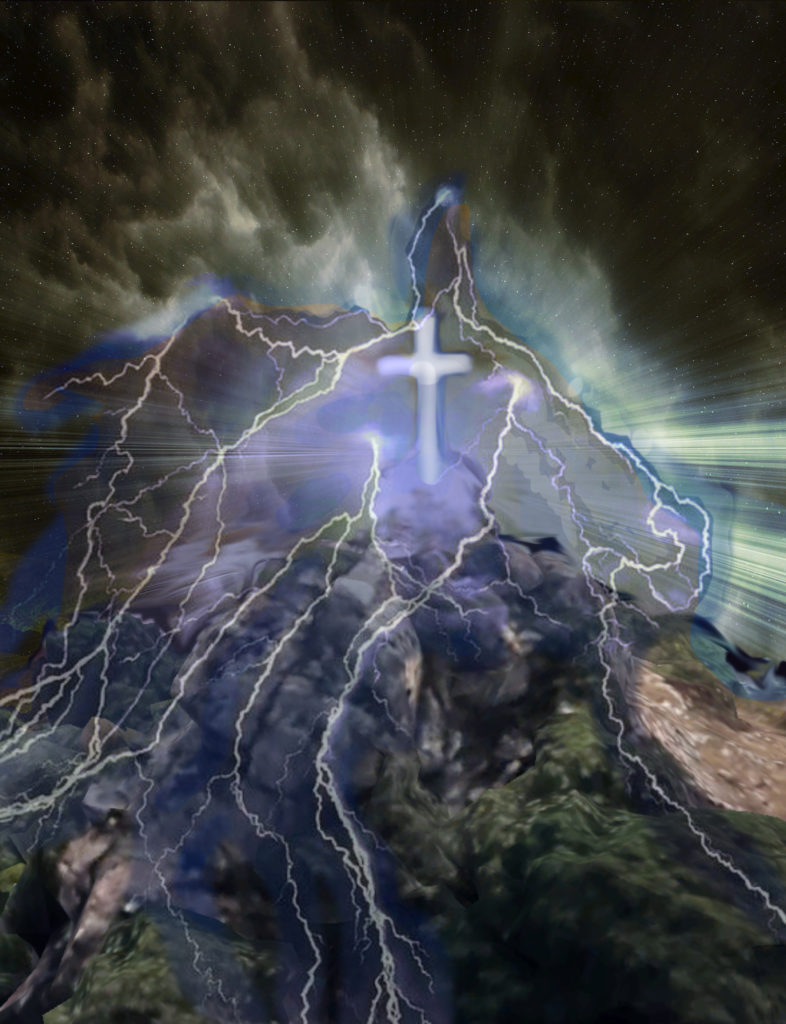 There was a time when the traditions of religious processions was ended in Mazatlan. The church bells did not ring. It was forbidden to even use terms like Adios which means Go with God. Worship and prayer was held in secret in what was known as those dark days.But like the lava that boiled up to form the hill, the love and passion of the people seek expression. They want to honor their land and the ways of the heart. So since 2011,  Don Ramn Zamudio,  has worked to bring back the beloved traditions once practiced. He thought even tourists would like to come, see and join in as they do in Europe. And since Mazatlan is the place of parties and fiestas, he reminds everyone that for 200 years people pilgrimaged to the hill, and placed an offering. The religious celebration at the cross ended in a great convivial tamaliza with music, including the blessing of objects held sacred to bring . It is seven years now since Don Ramon began to restore what weather, earthquakes and circumstances have wrought against the white cross. He is a fervent promoter that tradition not be lost.

“Come visit the cross on the hill on May 3rd from the 10:00 hours onwards. Everyone, residents and tourists. Here in Mazatlan where party is king, let us gather together in a procession to honor that spark of divinity that lives in the hearts of all and is symbolized by the shining white cross it is my privilege to tend.

Each time I ascend the Cero de la Cruz and stand looking down at my beloved city, I am filled with love and joy. There is peace here. Shelter from  storms. I feel grateful and more alive than I can tell. I feel one with everything.”

To receive a friendly email when Susan publishes her latest Blog post,you can subscribe here in less than a minute.

The Author will have books at the First Friday Art-walk in Mazatlan. Come to the Quilt show at El Cid.  Click here to read reviews.

One thought on “Cerro de la Cruz in Mazatlan, Mexico”