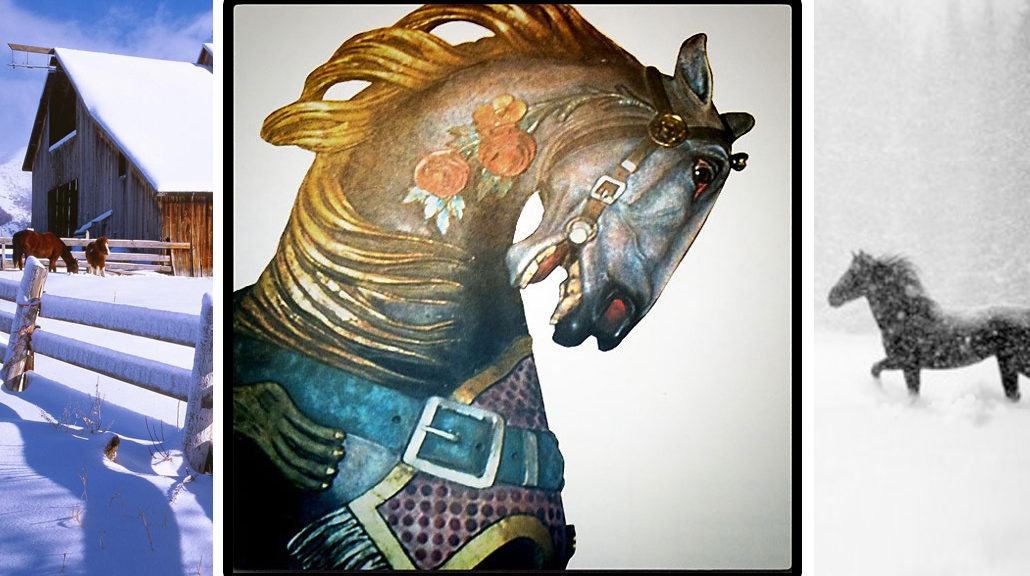 There is allot of common sense that comes from horseback riding: pretty is as pretty does. Be sure you can stop before you start. Remember horses run fastest toward the barn so slow your speed toward home. Know your horse and let him know you. Power without trust can get out of hand!
…

I asked if I could ride him. He was a striking black gelding with white stockings and big white spots that frosted his sides; his mistress had named him Sheik. She rode him with a light hand, jingling a little chain, and speaking sweet words while he curled his neck and obeyed her every wish. She didn’t say, “Watch out.” Guess she didn’t know Sheik was a one woman horse. She didn’t say, “Hope you live through it,” she said, “Fine.” So, me who had always admired the handsome figure they cut, thought I could just get on and ride pretty. Well-horses are different beings. You don’t master them because you are rough and tough, they accommodate you because they submit to serve and there is love in that. So, when I mounted-up—a stranger and a fool,—so began a ride to remember.

Thinking back on it, images come to mind. Just as I hit the saddle, Shiek snatched the bit and spun. Instantly we were streaking along an iced-over snow-packed road glowing silver(the sun had came out to shine it “slippery”) and a quarter mile ahead, in horror, I saw the long driveway angling away at 90 degrees, ending at the barn. I remember it was fairly cold—maybe plus 15 degrees F.— but I got considerably warmed up ratcheting a rein, trying to pull his nose around, all the tricks I knew to stop Shiek.  Much like the Flying Goddess hood ornament, he charged forward, like he was out to win the derby. We were closing fast on disaster. It would be like expecting a run-away train to make a square corner. There was just no way. I figured to go loop-de-looping into the ditch and be killed. (Was this his special way of getting rid of strangers?) but Sheik didn’t want to end up in the ditch with me, and I wasn’t going without him, so, in spite of gargantuan efforts to buggy rein him right, he executed at top speed, an impossible turn left, and zeroed in on the barn. Thankfully, the door was closed, but next to the barn was an open gate framed with logs calculated to sweep a rider off a horse should one try to go through. Sheik was in full stride (the better to be rid of me he thought) so I flung myself down indian style, flattened against his outstretched neck, prayed to be thin, and then we were plunging in great leaps and bounds into huge drifts of snow so deep, too deep, until finally Sheik stopped just short of the river.

I thanked God for snow as we turned back around. There she was—my girl friend standing in the gate waiting for us to high-step our way  out of the field—and she was smiling. “Can’t get to the river this time of year, too much snow,” she informed me. We didn’t talk about it again.
[contact-form-7 404 "Not Found"]
Order the Historical Novel by S.K. Carnes,  The Way Back, recently


released in all e-book stores.     To find it on Amazon, go to http://bit.ly/SoldiersJourney