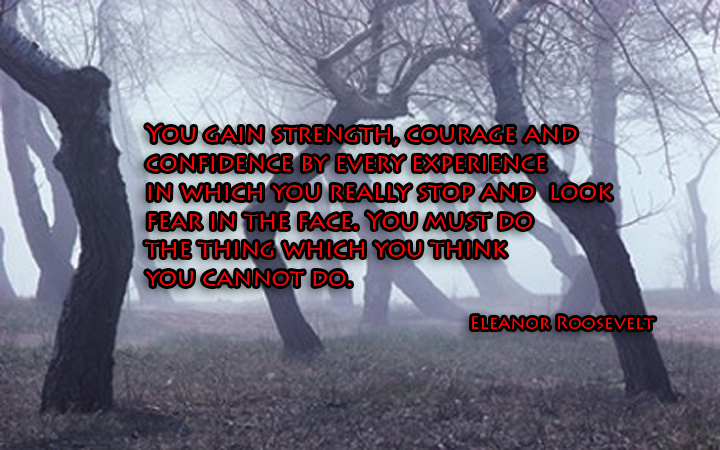 Fear.  A warning of danger, sometimes disguised as anger, hatred or rage, fear can portend evil as in the“dark side of the Force.”Fearing fear, I tried to stay out of its clutches. To me fear was like the dark side of the moon, shadowed in mystery and overpowering, and I focused on the sunny side, the known —where I had some control—except for sometimes. Sometimes, like ink spreading across parchment, fear stained my life. It fascinated even as it paralyzed me, and I determined that I would overcome it. But to do so, I would have to call it out, and in battle, it took away my ability to function, and left me white, shaken, and weak. It was a quest-my own Great Crusade. I learned that I did best when in the company of animals.


They bolstered my spirit. Indeed, when I was astride one of the big draft horses used on our farm, I felt invincible as a knight from King Authors table, drawing upon the animal courage I commanded.
Aware of my fear of heights, I aggressively attacked this weakness. I decided that I would make myself cross the railroad trestle that towered above the Middle River. I would ride my bike several miles, then, listen for the train, and hearing none, would start across the trestle. My heart beat increased in velocity and sound, until I could not walk but would have to crawl, going forward, clinging to the rails while my will dissolved in the echoes of the sound, and I could not proceed. I would carefully execute a turnaround retreat hand over hand until I could manage to rise and run back, sobbing at my failure and vowing to try again later with some new way of thinking.
Hoping to cross
I dared begin
But Fear was boss
And Fear would win.
Every year in the summer, there were picnics at the waterfall park, and everyone jumped off the top into the deep chasm at the base of the cataract. Everyone but me. When it was time for the picnic, I still had not jumped and so I stayed, and stayed and stayed, missing lunch out of determination. I stood quaking at the top until finally, when I gave up on myself and life itself, I jumped out of łack of caring. Then, sheepish and late, I got left overs or nothing-maybe a scornful look. Only when I gave over my life as in a sort of suicide could I do what I feared. As a college student, I would stay week-ends in Duluth to climb the condemned ski jumps. Sometimes an afternoon passed and I still could not manage to reach the top of the jump. Discouraged, my fingers freezing stiff with the cold, l would climb down, fear having won again.
There were other times when I should have been able to run away from danger but when fear set in, my legs went to mutiny mode. Then, I could only advance crawling or creeping on my stomach. I read articles and books, vowing to learn to beat this curse. I could take deep breaths while saying positive things, build on small victories, graduate toward the more difficult challenges as I explored my dark side. I noticed that on a downhill ski run, I fell when I “lost heart.”This defect was a mind thing to be studied, and the learning gave my life direction. Years passed, and by now I had a library of books about fear. With “ways around” strategies in my arsenal, I could cope as long as the situation was not too dire. I took up white water rafting, finally even daring to tackle the Grand Canyon of the Colorado —with mixed results. For there, lurking in the darkness was my old enemy waiting-waiting for the time to be right. Then one day, the worst thing happened; Fear and I came face to face… and there was no way back.

Order the new novel by S.K. Carnes.  The Way Back in all e-book stores.       Amazon: http://bit.ly/SoldiersJourney