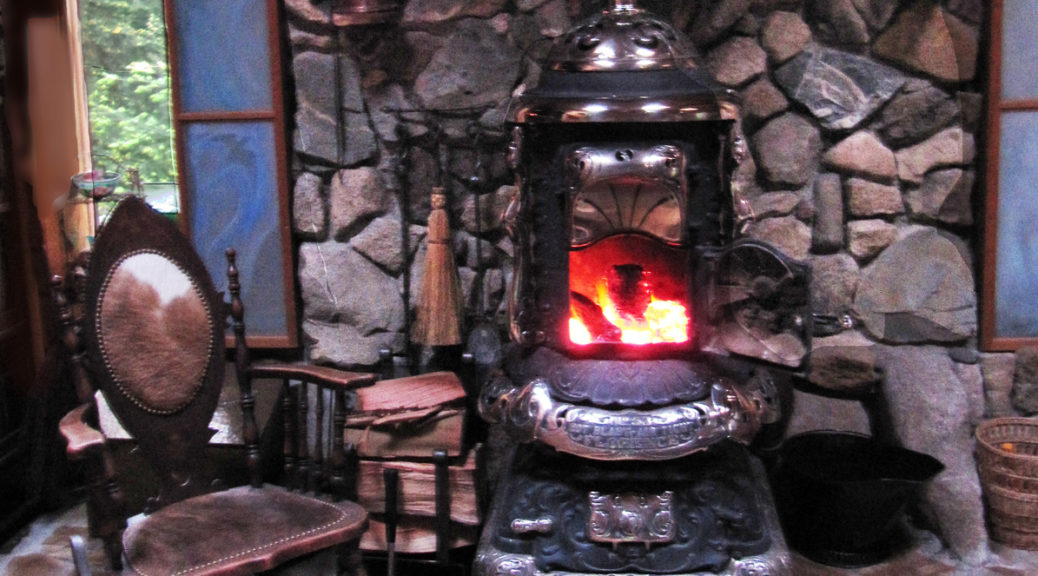 In the region of my heart where blizzards swirl and snow drifts—blinding and pristine— there is this core of paralyzing cold. So blue is this center, beautiful to behold, that should you fall under its bitter spell, you would lie frozen ‘neath a thousand years of ice—so blue it is. And for that reason, I worship at the altar of the stove.
I think it all started ’round my mother’s cook-stove, its green enameled face polished almost through in places,  its cast iron burning plate searing hot above riotous flames. The smell of baking bread, wood smoke and vanilla, still lingers like lowland mist in my mind. Ahh—heaven. And in those days, the brown oil heater reigned over the living room. I ran down from my freezing upper room to get dressed alongside her, wanting to hug her enameled belly, almost daring to be burned. Still, I never could get warm enough. Never warm enough to banish “the Blue.”
So when I moved to Oregon, in order to shield shadowy fear (circling all around me) and the cold wisped in fog (to disguise her icy fingers), I bought my first parlor stove. Made in 1896, refurbished, and lettered “Empire State,” it had a bright silver top and brass finial, like a light-house for a drowning soul. But it wasn’t enough. I couldn’t get warm enough, so I bought another. It happened with a move to Washington State to live on an island as far west and north as I could go. It had to be a special stove for such a move, so I went to Buck’s Stove Palace in Portland, and Buck-who maybe loved me a little, said he would find “just the one.” He looked “hi and low” and finally in an attic in Illinois, he found my Florence. Now here was an altar worthy of adoration. She stood taller then me on nickeled feet, and her face shone silver around isinglass licked by flames. I bought a house with a living room  wall set in stone— just for her—and she sat like a queen on her throne of polished flagstone.
But my fires were poorly built; I wielded the froe to split the wood, with a limp wrist, afraid of the breaking. It was only when I found Bill—the Keeper of the Hearth—that Florence lit up and the dismals were beaten back. And now, on any evening on our island, we sit like in an opera house waiting for the show. We open all the stove ports and the fire roars on center stage flanked by rocks fascinating in shadow-play and light. Look! There is the glint of fools-gold and mica, see the onyx dark against the white quartz while the life and death drama plays out. It is awful to watch hungry tongues devour the wood, the pitch pockets whistle and pop sending up little explosions, smelling of pine forests. At last the split fir is a black skeleton and Bill will feed the beast from his huge stash piled on racks, the kindling stacked precisely, the tools of the master hung at the ready. My living room is a primitive cave of wood and glass, stone and iron, with the hearth at its center, and the Keeper by my side; let the storm crash against my house of cedar, as long as there is fire in my stove.
For me, it would be wrong to have no need of the fire, or of the stove where it’s caged, for the hearth was my first love. There is something about a fire. Watch the spark blaze forth life in all colors of hot while death waits in the wings-to claim even the embers in Irish darkness. I hear the groans of solid form releasing energy, smell the essence free at last, speak with the old ones, feel the power of the creator, sense the mystery that teases at me, flickering truth that eludes me, leaving me always searching… for that warmth that is enough.

Please click on the link below to read about The Way Back , by S.K.Carnes. Three Reviews and a description are posted. http://readersfavorite.com/book-review/28930
Order The Way Back in all e-book stores. Amazon: http://bit.ly/SoldiersJourney
[contact-form-7 404 "Not Found"]