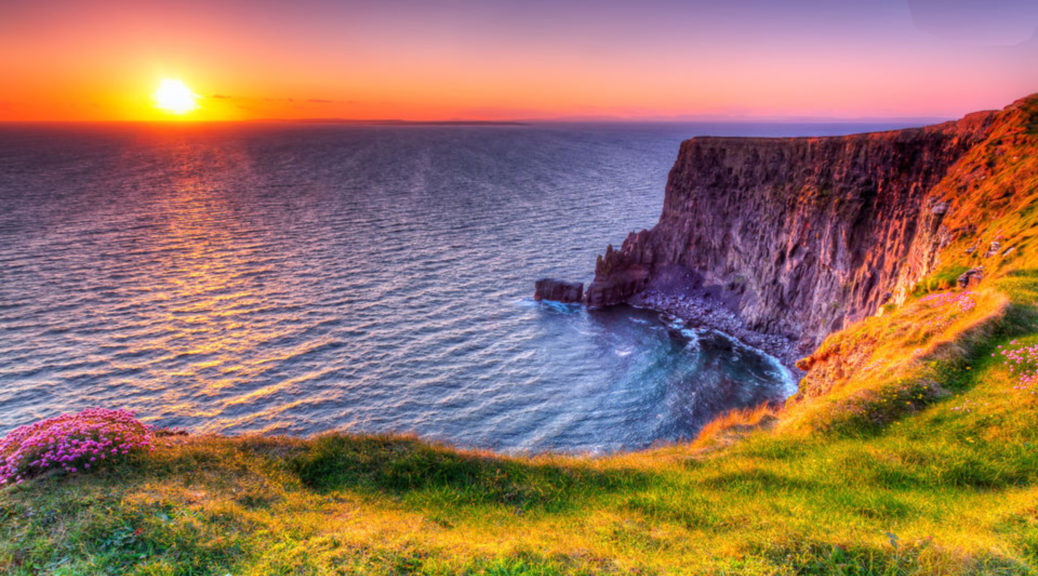 In December of 1872, the English born actor, traveler, entomologist, writer, and founder of the Bohemian Club of San Francisco,  Henry 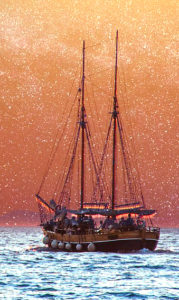 Edwards and his wife visited Mazatlan. Â His descriptions were peppered with praise, and salted with wry humor as he wrote of his visit to this city and people. Encarnacion Osuna Garate of the Mazatlan Archives sent us “Three Weeks in Mazatlan,” a journal of Edward’s experience.   This blog-post and the next post are distilled from Edward’s description of what MazatlanÂ  was like to visit for pleasure instead of for conquest.

First Impressions of Mazatlan: It looks good from a distance!

“It was a picture full of strange and dreamy beauty that is found only in tropical climates, and that gives the spirit a sense of almost oppressive sadness; that fills the heart with drowned longings for a better understanding of his secret love; and suggests to the soul a vision of that better and brighter land ‘beyond the heavens’ which is the support of our earthly pilgrimage. The first plane of the painting is formed by groups of low houses with flat roofs curiously painted white, blue, pink and yellow crowned by giant palm stems moving their arms in the soft breeze, with a facade illuminated by the transparency of the tropical sea; while beyond there stretches a series of broken hills crowned with a dense and curious vegetation – a purple mist crowns its summits and in the distance mixes with the dark. Around and above the glorious golden of the tropical dawn. spreads the most delicate purple tints shade the richest crimson; and, surrounded by a greenish sieve of an almost ethereal brilliance, the inclined rays of the luminary that approaches the dull green foliage, illuminate it with transcendental splendor.” 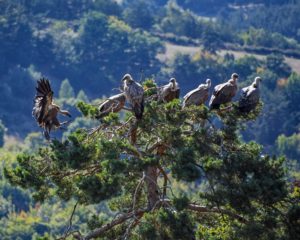 Far away Mountains, giant cacti and Also the flight of vultures that looms over us like tireless ghosts of those who have already left;  groups of gray pelicans and graceful white cranes in the water lend a vivid interest to the stage. The vultures, prized as carrion animals in all tropical countries, here also perform their valuable trades and, being protected by the government (killing them is punishable by a very high fine) exist in large numbers. Its gloomy and dejected, sad and melancholy forms, like Poe’s crow, are seen everywhere in the city and its surroundings.

Musings by Edwards as he travels 2 miles to shore by small craft from the mother ship.

“While during the past ten years, more than two million dollars of various nationalities have been collected for lighthouse rights and almost the same amount for the concept of piloting, there is not a single lighthouse on the entire Mexican coast. Presently, the tasks of the pilot consists of skiffing along three or four hundred yards ahead of the boat he is guiding in, while waving a white flag to show the way. Further south, there seems to me to be a suitable place for such a light house,  the island called El Crest Grande. It dominates the area. In its South Western corner, there is a singular cave whose walls are strongly impregnated with sulfur opening into unknown and unexplored passages to the heart of the mountain. A little north on the mainland, rises a high and rocky hill on which are the remains of what was a powerful fortress which by its position offers an important point of defense; with that peculiar carelessness of the Mexican race, the fortress has gone collapsing into decay. At the top of this eminence is the flagpole.”

“The city is built on an isthmus that at its narrowest point is no more than one hundred and eighty meters long. The old section is that of the north and the new section, mainly inhabited by the upper class, is the southern part.”

“The longest street in the city is Calle del Recreo, which stretches for about a mile and passes next to the main plaza. At the western end it reaches a large esplanade facing the ocean, called Los Altos, which is the favorite walk of beauty and fashion in Mazatlan. Here are built some of the best houses in the city, the homes of wealthy merchants and others of wealthy class, furnished with exquisite taste in which a generous and profuse hospitality is extended in the most polite and refined way. The city has three squares, the main one is oblong, as of ninety meters long by forty-five wide. The north side is dedicated to a hotel and the halls of the Mazatlan Club, an institution greatly supported by foreign residents and which, if not for the game of the mont© that is so favored, will provide many hours of pleasure to the visitor who has the fortune to gain access to their exclusive recreations. A corner of the square is occupied by the offices of the telegraph company. A line that has recently been carried across the continent, connecting Mexico City with the Pacific Ocean. However, due to the frequent revolutions it is sometimes impossible to send a message as each group, upon reaching power, thinks it is their duty to destroy poles and cables. Here is an example: in peacetime a message takes six weeks to reach Durango, a city one hundred and thirty leagues from Mazatlan, so with such management Mexico’s telegraph service seems of little public benefit.

On the Porters of Mazatlan

The porters that receive tonnage that comes off the boat and gets deposited on the “dilapidated pier, are counted among the institutions of Mazatlan and the loads they carry seem beyond what is possible. I saw a man carrying seven boxes of claret from a barge to the Customs, a distance of more than one hundred and fifty meters, and on another occasion I found one of them with a piano on his shoulders; but I was already so used to them that I was not surprised by his prowess. These wonderful loads are supported on a cloth that rests on the shoulders, and whose strap surrounds the forehead and is made to support part of the load.  A visiting business man shipped wagons and carts to Mazatlan to assist with transport, but the spirit of progress did not prevail. Instead, worried that the carts would spoil the shipping business (early evidence of a Porter’s Union) the local government sent them ‘post haste’ back Â to New York.”

“The only carts that are used now are rough and heavy wooden wagons  that  have very high tires and very low yards. They carry a chair tied to the rod in the roughest way by a rope, while the head of the donkey pulling it is free of all ties without abridle or a berbiqu­. The driver walks next to his mule and directs it with words.  It is not uncommon to find a number of these animals coming to the city loaded with a pile of corn on each side of the pack saddle, all cut 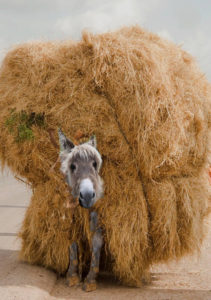 almost at ground level, which are joined when reaching up to five meters in height. The loads perfectly envelope the animals and only allows their heads and ears to be seen.

Work-donkeys, without which the Mexican could not exist, are enduring and patient, and  have certainly solved the problem of how to do the greatest task for a small amount of food. On rough roads, almost untenable for the human foot, these powerful and intelligent creatures carry their heavy loads carefully and always safely going to the most dangerous places, rewarded only by what they harvest on the road or occasionally by a handful of corncobs at the end of the day. Still, the handler guides his donkey with words and not with the whip, and there always seems to be a good understanding between the animal and its owner.

One day I witnessed an incident very illustrative of this fact. A small mule carried a cart loaded with boxes of wine and when turning a corner he got too close to a post placed to protect the sidewalk, which caused the vehicle to stop suddenly. The driver instead of whipping the animal and cursing him, as is common in other places, in the most carefree way  took out a cigar, lit it, leaned against the nearest portal and started smoking. Between puffs, he rubbed the animal, and laughed with good humor about the attempts the beast made to free himself from the pole. I would translate what he said something like:

He laughed all the time while the animal pulled and pulled so hard to knock down the post. The poor animal seemed to understand everything he said, expressively raising his ears and then lowering them; he seemed to understand the difficulty he was in, and pushing the cart back suddenly, turned and feeling free of the post, he marched triumphantly with his load. His master followed along slowly as he lit another cigarette and applauded the execution. I applauded too and, walking towards him, I extended my hand saying:

‘ Bravo, friend! That is better than whipping him.’

However, I forgot that he did not speak English. So I tried to speak in Spanish. However he understood me even less. With that I concluded not to try anymore. He offered me a cigar, gave me the usual salute of Adios sir and went lazily and happily down the street behind his mule.”

Next Blog: More about Mazatlan in the 1870s as Henry Edwards tells about the National Hotel  where he and his wife stayed, how he furthered his studies in entomology without leaving his room, the first night in Mazatlan, and what the entertainment scene was like in the good old days.